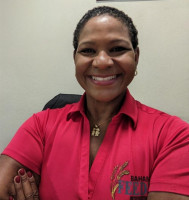 Having spent her entire adulthood as an educator, Nicolette Fountain Archer has recently changed course, taking on a new role helping to run the Bahamas Feeding Network (BFN), one of the largest charity organizations in the country.

“As my stepson said, I have now gone from feeding minds to feeding tummies,” said the former St. Anne’s School principal as she reflected on the transition.

“Just seeing the people every single day who call, text, looking for assistance, you know the need is there so you know that you need to work it.”

BFN Executive Director James Palacious, who announced Fountain Archer’s appointment, hailed her as an important addition to the network’s team and an asset in its mission to feed those in need.

“We couldn’t be more pleased to have Nicolette join us at BFN, playing a vital role in our efforts to feed tens of thousands of Bahamians every month,” said Palacious.

“She (Fountain Archer) has already spent much of her life giving back to The Bahamas through the education of thousands of students and now she’s able to continue playing an important role in the lives of many in a different way with BFN.”

Fountain Archer began at BFN in August, replacing the outgoing office administrator. And though the new position is a departure from her past experience, Fountain Archer said the role is one she believes she is suited for.

“I've always been someone who likes to do and to give, so this is in line with who I am as a person,” said Fountain Archer, who is active in the Bahamas Girl Guides Association and a prospective member of Zonta International.

Helping to run the NGO that is often all that stands between hunger and health, or even worse, is hard work, yet rewarding. She pointed to BFN’s inaugural golf tournament, Tee Off for Hunger, which took place in September, as one of the highlights of her time at BFN.

“That was amazing and it was fun,” she said. “And it was interesting to see that members of corporate Bahamas and members of the golfing community were so eager to compete, knowing that the funds would come back to us.”

“I would like to encourage not just corporate Bahamas, but the average man, the average woman and even the average child to recognize that they can give,” she said.

“Hunger hurts. Together, we can wipe it out.”