Three years after Royal Caribbean International’s president and CEO first saw the impact of a feeding program operating out of a crowded cottage in Nassau and vowed to lend support, the cruise line this week delivered its most generous gift yet – nearly $1.5 million of food weighing 675,000 pounds - enough to provide over 2 million meals.

Smith was looking at eight refrigerated containers stacked at Arawak Port, each packed with meat, poultry, seafood and one packed with dry items. It was the first of three shipments expected this month and followed last year’s donation of $400,000 plus 5,000 turkeys for the holidays.

Stacked - RCL food donation to BFN
“I am speechless,” Smith said. “There are no words to express what this means and how many people it will help feed. There are no words to express how much we love and appreciate Royal Caribbean, Michael Bayley, the president; his team; everyone at Royal who has contributed to this, and especially knowing that they have had no revenue in the last year because of the pandemic.”

After that year’s suspension of sailing, the cruise line announced late last month it would resume operations in June and in a novel move, would begin summer voyages from Nassau, creating homeporting opportunities for The Bahamas. The first Royal Caribbean ship to return to service in the region since the shutdown, Adventure of the Seas, will sail from Nassau on June 12.

Royal Caribbean International’s President and CEO, Michael Bayley, has said publicly many times that Nassau was the cruise line’s first destination over 50 years ago and remains its most visited port of call today, bringing more than one million guests a year to Nassau.

That close affiliation has created bonds between Royal Caribbean and a number of entities in The Bahamas, including the Bahamas Chamber of Commerce and Employers’ Confederation, the National Training Agency, LJM Maritime Academy, Music Makers and Fox Hill Original Congos Junkanoo groups, the Berry Islands Community Centre, the National Food Security Task Force and schools in Grand Bahama and throughout the islands.

But no alliance and no commitment has run deeper than that to the Bahamas Feeding Network.

“We took a team from Royal Caribbean to Moseff house in Fox Hill where we first saw the work of Bahamas Feeding Network volunteers pouring their hearts and energy into preparing, packing and distributing hot meals,” said Russell Benford, vice president, Government Relations, Americas. “We were blown away by what we saw and we have continued to be impressed. We are happy to help in any way we can and are determined to find a way to ramp up that assistance at this time, knowing the need had increased over the last year.”

According to BFN’s latest report, it has provided over 138,000 food parcels since last June, providing 9,660,000 meals. This latest donation will result in enough food parcels to feed over 500,000 families.

“We believe in ‘Just Give’ and ‘Just Love’ and Royal Caribbean has been giving and giving and giving, even during challenging times and we cannot express,” said Smith, “how much we in The Bahamas appreciate and love them.” 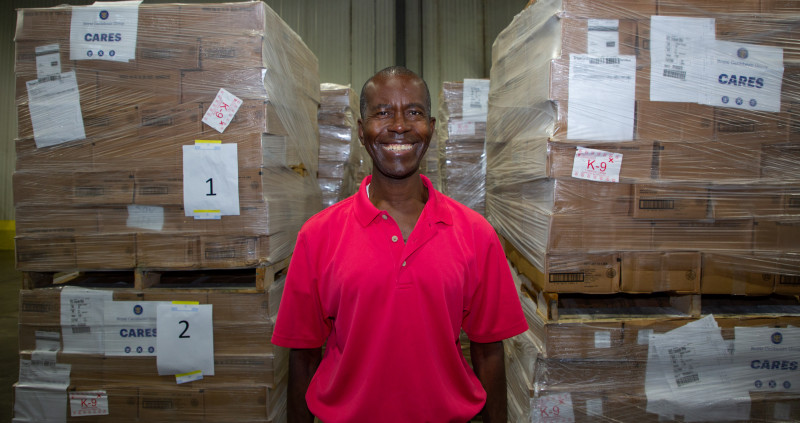